Autumn Chains is in The Final Issue of QQ

For the past few years, I have been fortunate to write an article called "Does It Work?" for the Quilting Quarterly which is the member magazine for the National Quilting Association.  In addition, two of my quilt patterns have been featured.

Recently, the NQA announced that it is disbanding, so the Fall 2015 issue is the final one to be published. 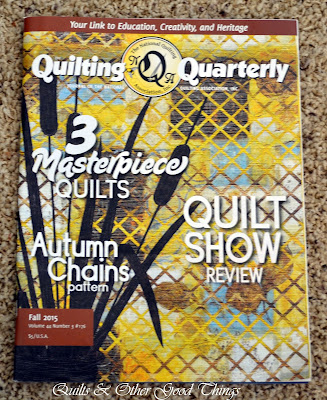 For the first couple of years, the "Does It Work?" articles featured products that I tested and reported the results of the test.  It was fun and I learned a lot.  The last two years, I have worked with a panel of 6 quilters from across the United States to do the testing, reporting their results to me. Then I compiled the results of the 6 testers into an article combining the comments from the testers.  Some times they agreed and sometimes they did not which made it very interesting. It was fun to work with these 6 quilters and get to know them through our correspondence as I had only met one of them in person.

Barbara Polston, a talented quilter in her own right has been the editor of the QQ for several years and was a delight to work with. Click on her name to go to her web site and see the exciting things she is doing.

The final issue of the magazine contains the last "Does It Work?" article. Our testers reported on basting glues. 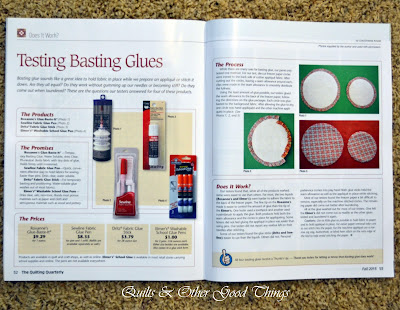 This final issue also features my pattern Autumn Chains.  This quilt is a scrap quilt as most of mine are and is based on Single Irish Chain, a traditional block.  This past weekend, Autumn Chains started living on my bed for the next couple of months for that Fall feeling in the room. 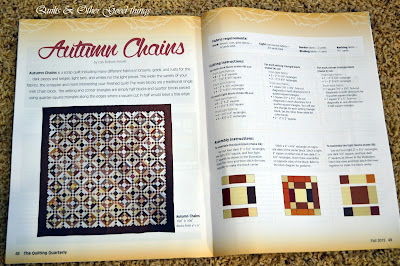 You may remember that I began this quilt at one of the mini retreats at my friend's cottage in the woods a while back. You can see some of the progress here.  You may notice a glimpse of the quilting here.  The back is pieced and I shared that with you here. 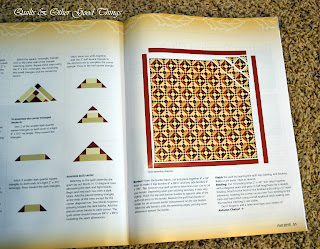 The blocks are on point, so the setting triangles to complete each row are made up of half blocks giving the illusion of a border before the final border.  It is a huge quilt -- 100" x 100" and was quilted on my Bernina.  Huge quilts seem to be my default and are not easy to quilt on a domestic machine! 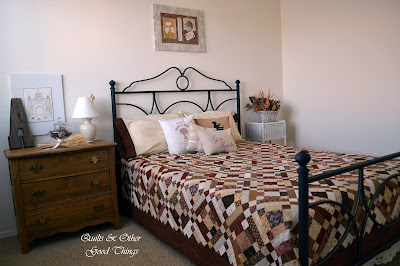 This photo was taken when the quilt was on the guest room bed.

While I am sad to see the end of the National Quilting Association and the opportunity to write articles for the Quilting Quarterly, it does mean that I can pursue other avenues of quilting and writing.  I do plan to start sharing with you some "Does It Work?" articles.  Some may be things I've already tested and I'm thinking of some other products that I might like to test and report on to you.

It is finally cooler in Arizona this week, meaning it's under 100 degrees, so let the Autumn begin even if it's later than the rest of the country!