Cars and trucks are wonderful inventions.  I'm thrilled to be able to get in a car and travel to distant and not so distant places.  I am NOT so thrilled when the vehicle I'm in decides to quit working.  I am especially not so thrilled when it decides to stop working in rush hour traffic.  This past week I had the "honor" of riding with a tow truck driver 3 (three) times.

Not so much fun.

They were very nice men, but still, not so much fun.

First the starter decided to, well, not start the car.

On a Friday night.

At the grocery store/pizza place.

The battery was determined to be fine by the first person sent out by AAA and suggested it might be the starter.  He called for a tow for us.  The tow truck driver confirmed that the battery was fine and said it was probably the starter as he could hear it trying to start the car. We had it towed 15 miles to our house.

We had to be someplace on Saturday. It's a good thing we have a truck, too!

Sunday, as you know, car repair places are usually not open.

Monday, we called to make an appointment for the car, and, oh, yes, a tow truck to take the car to be repaired.

Tuesday, I rode once again in the tow truck to the car dealership to get the work done.

"Looks, like the engine froze up. That's not a good thing." the first man told me.

"Hmmm, have you looked at the starter?" I replied, hopefully in a sweet voice.

Since I came with the two truck driver, what else was I going to do?

Enter, the second man.  "It looks like you've got a bad starter."  (I only thought, Ya think?) "We can get one locally, or you can wait 2 hours for a Delco to be delivered."  I opted for the local one, they put it in and I was on my way home.  Yay!

Thursday on the way home from work at the SAME INTERSECTION as the grocery store/pizza place the battery light came on, the power steering quit and it over heated.  We were in the far left lane, of course, and had to get to a safe place to get off the road during rush hour.  Fortunately, Gary is a very good driver and we did so without incident.

AAA sent a tow truck. We rode in the tow truck to a different car dealership.  Our usual car dealership. The one near our daughter, Beth's house.  She's a sweet daughter and let us use her car to get home.

Friday, I took her car back to her early enough for her to do the first school run.  She dropped me off at the car dealership before making the second school run.

Do you think it's a bad thing when the service representative calls you by your first name even when you arrive without an appointment?

A pulley that holds a belt had broken.  The belt was ruined, too.  And, oh yes, as long as we are in there, the alternator was about to go.  We decided to save a trip in a tow truck and have that fixed, too. The last time he had told me something was about to go, it did -- on the way home from getting the car fixed.  I listen when he talks now!

This all reminded me of this little quilt I made.  I named it Mr. Goodwrench meets Rubber Band Man. 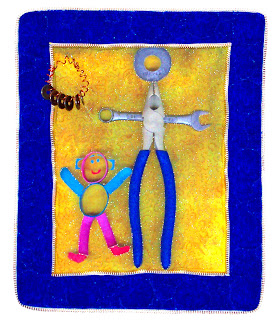 The man made from rubber bands and the pliers, wrench and washer were scanned into the computer covered by bright yellow fabric.  There is an inner border of metal zipper teeth and the "binding" is also zipper teeth.  It was made for a challenge in Studio 222, the art group I was a part of in Auburn, AL. (They are a great group!)  The challenge was "heavy metal".

Though I like the real Mr. Goodwrench at the car dealership.  I hope it's a long time before I see him or the inside of a tow truck again!

That's my story and I'm stickin' to it.

Have you thought about setting up challenges for yourself and making a small quilt just for the fun of it?  Studio 222 does it all the time and it challenges one to think creatively.  Share any challenging ideas you might have for fun quilts with me.  I'd love to hear from you!

Until next time,
Lois
Posted by Lois Arnold at 12:10 PM 2 comments:

For some reason January reminds of of undone things, or at least it does me.  I think of projects left undone from the year before and I do guilt really well, so I feel guilty about not finishing them.

I've also been thinking about  church architecture for some reason.  I think it may have to do with the recent shootings in Tucson and all of the funerals in various churches in the Tucson area for those who did not survive an innocent trip to the Safeway store to meet Congresswoman Gabrielle Gifford.

Several years ago, Gary and I were privileged to go to an event in Puerto Rico.  Two of the days there, we spent in San Juan.  On one of those days we had selected a guided tour as our activity.  After the official time was up, the guide told us that he would continue the tour for anyone who wished to see more of Old San Juan.  We jumped at the chance to see more with a guide telling us the history as we went.  This was too good to pass up.  Walking around looking is fun, but having an expert tell you what you are seeing is even better when it comes to historical places.

One of the places I was quite taken with was a small chapel - Capella del Christo.  I did not own a digital camera at the time, so this is not the best picture and has been scanned in to the computer.  It does, however, capture the rustic character of the chapel. 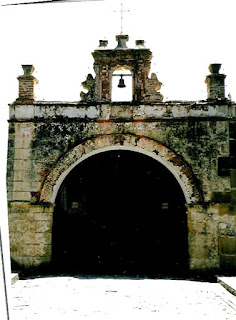 
My intent was always to make a wall hanging from the picture, but years past before I finally got around to doing something with it.  I had been in an art quilt group while living in Montgomery, AL, and shortly after moving back to AZ, the group there was having a special exhibit in a gallery.  We were all to make a piece that was to be centered on an artists canvas, with the canvas left white.  I decided to do a thread }sketch" of Capella del Christo using brown thread to look sort of like a sepia tone.  I then embellished the piece with beads and stitched brown bugle beads all around the exterior edges to separate the muslin the "sketch" was on from the stark white canvas.  This is the result. 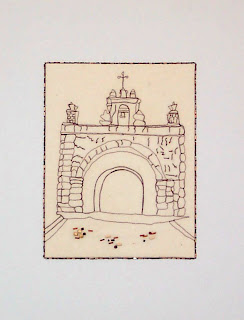 
Capella del Christo II never got done which is what I've been thinking about lately.  The second piece was to be either an applique piece or a fused "applique".  I had even collected fabrics for this project, just never completed it.

Do you have any projects left undone that have been bothering you?  Let's make 2011 the year we do some of those things we never quite got around to.  Life is too short to have regrets over things we intended to do, but didn't.

Until next time, keep stitching!
Lois
Posted by Lois Arnold at 6:15 AM 4 comments:

It's not that everything was bad about 2010, but I'm really ready for a new year.  Remember the feeling you got on the first day of school when you had brand new crayons and brand new notebooks?  The new year feels like that.  It hasn't been written on yet.  Well, okay, this is January 3, so a couple of days have been written on, but that's okay.  We started the year with 1/1/11 so it just seems that this will be a really good year.

This quilt was made from doodles that I had done in my sketchbook.  We lived in Alabama at the time and these doodles reminded me of the symbol the TV stations used when we were on hurricane watch.  One of the things I had not been aware of before we lived in an area that was in the path of hurricanes a couple of times while we lived there was the spin-off tornadoes.  Now tornadoes I was familiar with having grown up in the Midwest!  The difference with the hurricanes was that the hurricane could be tracked with radar.  Tornadoes on the other hand give little warning. 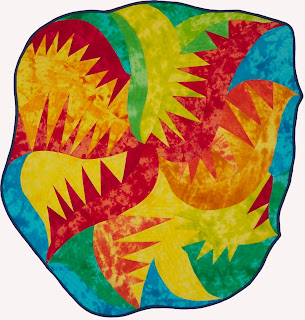 The name I gave this quilt is "Eye of the Storm".  That's what 2010 felt like to me -- being in the eye of the storm with a lot going on.  Some of the stuff was good, like the birth of our first great-granddaughter, Summer.  Some of it was bad, foot surgery that didn't heal quite as planned and the death of Gary's mother.

The quilt I just finished is called "Blue Skies and Sunshine".  I can't show it to you yet as it will be in a magazine later in the year.  It was finished in 2010 and all I could think of while working on it was blue skies and sunshine like we have here in Arizona most of the time.  Today it's a chilly blue skies and sunshine day, but who can complain?  We don't have rain or snow to contend with like most of the country does right now.

I'm looking forward to a year of mostly good.  We have to have some bad in order to appreciate the good, though.  I wish for you a wonderful new year with plenty of good things in your life.

Blessings to you all,
Lois
Posted by Lois Arnold at 7:15 AM 2 comments: