A Paper Quilt for a Birthday Surprise

When we returned from San Diego, I brought back good memories, a lot of fresh new ideas, a bag full of books and information, a ton of notes and a cold.  The last I would have rather left in California!

On Friday when I returned to work, my office had been made over.  Friday happened to be my birthday, so while I was gone, our Administrative Assistant, Director of Early Childhood and Director of Kingdom Kids redecorated my desk. 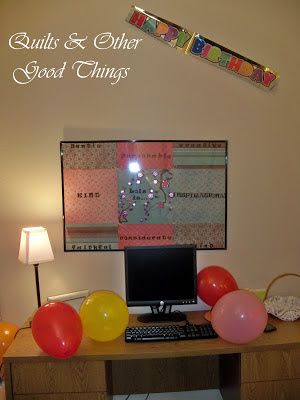 Pardon the flash in the center of the paper quilt. We keep our offices cozy by using lamps instead of the fluorescent overhead lights that are so "officey". And, we have no windows! 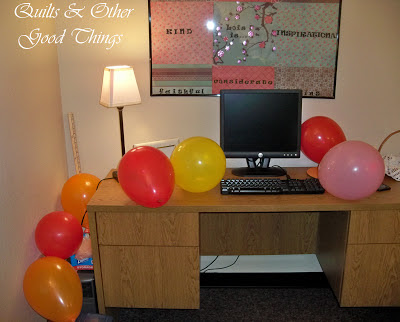 Someone blew up a lot of balloons,\ -- they were all over the place! 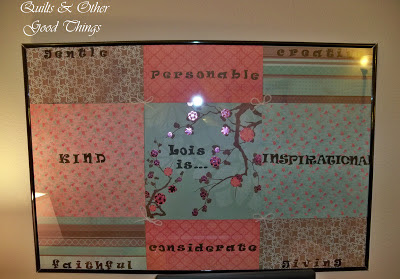 The best and permanent part was the paper quilt they constructed for over my desk.  When I moved into the office, my position was an interim position so I had not really decorated the area for what was to be a few months.  I just left the art work that was already there.  It has turned into more than that, so my wonderful co-workers created and framed a paper quilt since they know quilting is what I do when I'm not working with them and the kids.
I am blessed to work with a great team who pull together to make the Children's experience at Chandler Christian Church the best possible.  And the bonus is, they are great friends as well!
Hope you have had a marvelous Monday.
xoxoXOXOxoxo
Lois
Posted by Lois Arnold at 5:34 PM 1 comment:

One question quilters get asked a lot is, "How long did it take you to make that quilt?"  It always makes me laugh a bit because I think about the actual working time versus the time span it took to complete a quilt.  Actual working time is far less than the time span.  If you are a quilter, you understand this.  A design can be in the works for months before it is even drawn.  The fabrics can be cut and waiting for quite some time before a stitch is taken.  It all depends on how much time you have to work on these projects as well as how many projects you have in the works!

Autumn chains was begun at the mini quilt retreat my friends and I had in August.  I told you about that here.  The light blocks were done a bit later and I showed you those blocks on the design wall in this post..  Finally last week, I finished the dark blocks and added them to the design wall.  Now it looks like this. 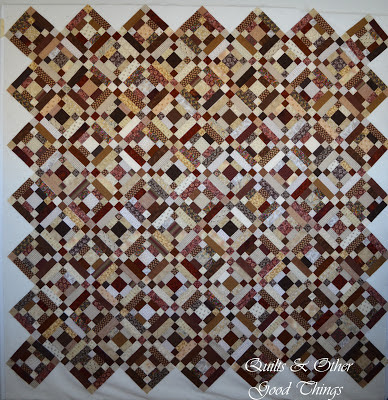 It would be nice if this quilt would be completed by next Autumn instead of joining the quilt tops ready to be quilted and sitting around for ummm, sometimes years! 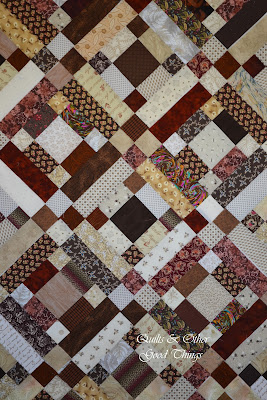 Some of the blocks mights be switched as I notice fabrics that are too close to other blocks with the same fabric in them. 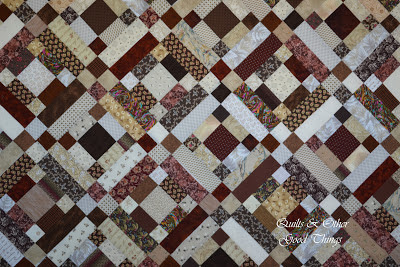 Do you see the dark chains and the light chains going through the quilt? I've been wanting to make one of these forever!  It is really a simple single Irish chain variation which is a traditional pattern.

Now the next decision is what to do with the setting triangles around the edge.  I haven't decided if I want to do a single fabric which would be the fastest or do string triangles like I did for the Saw Tooth Star quilt that I showed you in this post.  What do you think?  Plain or pieced triangles?
I do think I want it to be a light fabric as even the white of the design wall doesn't look all that bad, though it is a bit stark.  I don't think I want dark triangles, though since the outside row of blocks are dark.
So, how long does it take you to make a quilt?  Do you start a project and not stop until it is complete or do you have multiple projects going and work a little on this one and then a little on that one.  Or, perhaps, you are just a busy person and stitching time is hard to come by so a project drags on and on.  I tend to just get busy with other things as well as stopping to make other projects. Maybe I have project attention deficit and I need to hop from one to the other to be content.  What do you think? Does that sound right?  Though there have been times when I have stitched long into the night working to complete a project if there was a deadline.
Hope you are having a fabulous day and that you have at least a little creative time.
xoxoXOXOxoxo
Lois﻿
Posted by Lois Arnold at 12:54 PM 4 comments: