Life has been quite busy for a while -- sorry for the lack of posts.  I'm hoping things will slow down a bit after Easter.  I doubt it, but I can hope!

A lot of years ago, the first article about quilts with me in it was in the West Allis Star newspaper.  At the time, I certainly would never have classified myself as a quilter, but our ladies group at church decided to make a few charity quilts.  The newspaper somehow found out about it and decided to come take photos.  I was in my late teens or maybe 20 at the time and I appeared in the photos with my sewing machine working on piecing the quilt top.  I tried to find the article, but I've misplaced it.  We had fun and there were two lovely ladies who knew how to quilt and instructed the rest of us. I'd love to show you the article and I will if it turns up.

The next time was in this publication. 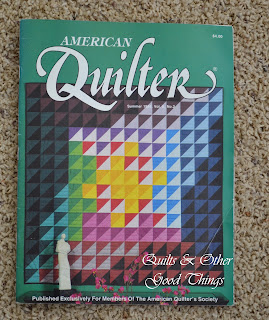 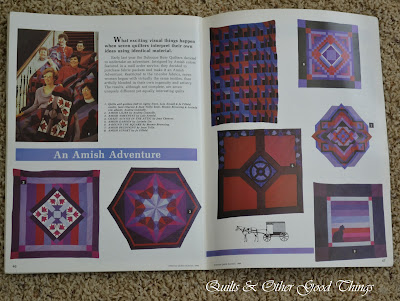 I am the one on the left in the first row.  My quilt is on the right on the same page.  You might recognize a couple of people in the photo.  Bonnie Browning is in the upper left and several years later was hired as the Executive Show Director by the American Quilter's Society.  Also in the photo is Lorinda Lie who wrote Heartfelt Quilts.
Several of my quilts have been published in various magazines and books over the years.  It's a lot of fun to have someone call you to ask if it is okay to publish a photo of your quilt!
Lorinda isn't the only one who became an author out of our little group.  Bonnie has a number of books published and I also am the author of Pine Tree Quilts. 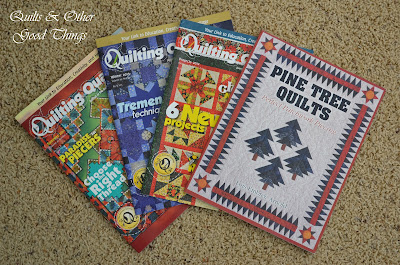 It was my intent to do another book shortly after this one, but we moved a couple of times across country and, though many of the quilts were made for the book, I just didn't get it written.
As a result of being an AQS author, I was asked to make a quilt to be published in honor of those who died on 9/11/2001.  The book was called United We Quilt. 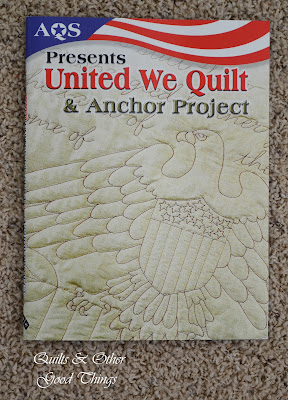 I've shown you the quilt that I made to commemorate that day. 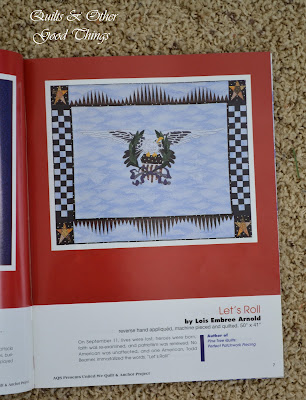 These quilts traveled for 3 years across the country as they were exhibited in galleries in remembrance of that fateful day.﻿
﻿
Lately, though, I've had several articles published in the Quilting Quarterly which is the National Quilting Association magazine for it's members. 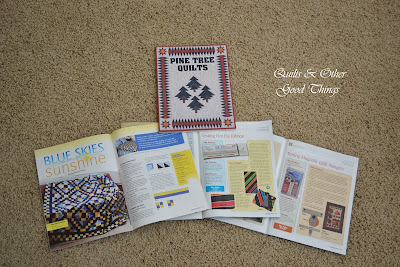 The first article was the pattern for my quilt Blue Skies and Sunshine, which appeared in the magazine on the left above.  The next 2 articles are a series I'm currently writing called "Does It Work".  In these articles I test various products to see if they live up to their promise.  The middle and right magazines above show the first two of those articles.  Number 3 is coming out any day and the editor has number 4.  I am also working on another quilt that will be published later in the year with it's pattern.  I showed you the beginnings of it, but now it's under wraps until the article comes out this Fall.
Deadlines keep us on our toes when we write!  I have 2 articles due the same week, so I will have to carve the time out to get both done, hopefully before the deadline gets too close!
Hope you've enjoyed reading about my adventures in publishing. It is something I love to do and making the quilts or projects to go along with the articles is a lot of fun, too.
Until next time!
xoxoXOXOxoxo
Lois﻿
﻿
﻿
Posted by Lois Arnold at 5:25 PM 2 comments:

Are you Irish?  Hmmm, does Scots Irish count?  If it does, then yes, maybe we are a little bit Irish.  Dear hubby is about half Irish -- his mother was a Bailey.  My mother's last name was  Mc name so probably more a Scottish name than Irish.  I always forget if a Scots Irish person is a Scot living in Ireland or the other way around.

Since everyone is Irish on St. Patrick's Day, I decided to make some Irish Soda Bread to celebrate.  Well, it is kind of like me -- maybe a little bit Irish.  Since I didn't want to go somewhere to buy any ingredients, I used what I had.  I had only whole wheat flour instead of white, so used that.  I did have raisins and dried cranberries, but no currents so I went with the dried cranberries.  I like those better, anyway.  The recipe called for Irish Whiskey - hmm fresh out of that, we'll just leave that out and add a bit more buttermilk.  Oops, no buttermilk either.  No problem, just add white vinegar to milk and you have buttermilk, sort of. 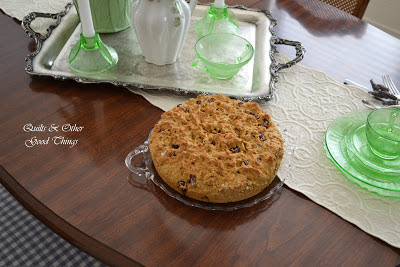 It at lease looks like some of the pictures of Irish Soda Bread I found. 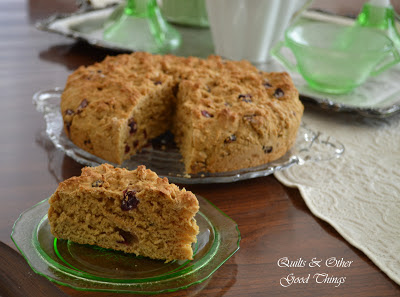 The recipe was from a very old bread book.  I may try another recipe as there are several variations. 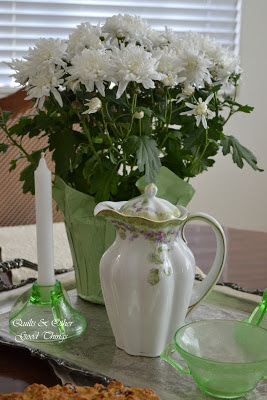 It would go well with a little Irish Breakfast tea. 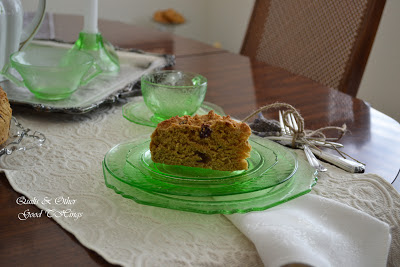 The green Depression glass was given to me when I was a little girl. 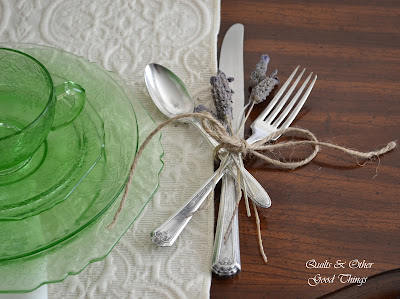 The silver was in a bag and VERY tarnished when I found it.  The tag said it was from about 1929, so just perfect for the Depression glass place setting. All the pieces are not the same pattern. I don't mind. 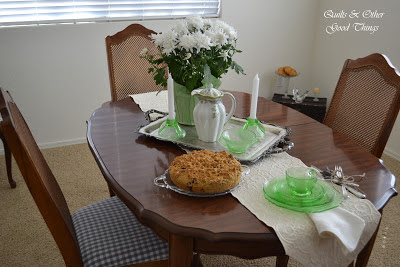 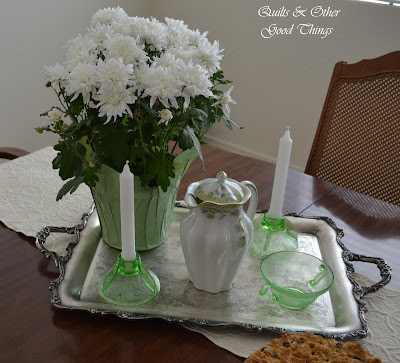 The flowers were the birthday flowers Dear Hubby brought to my office as a surprise. 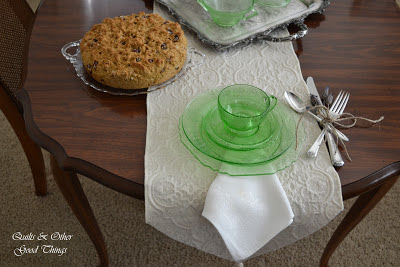 Hope you are having a Fabulous Friday!
xoxoXOXOxoxo
Lois
Posted by Lois Arnold at 3:54 PM 2 comments: