February is the birth month of two presidents, George Washington and Abraham Lincoln.  I'm sure you knew that since we celebrate Presidents Day in February.  Though Abraham Lincoln was born in Kentucky, he spent much of his life in Illinois.  In fact one of my favorite childhood experiences was going to New Salem to see the log cabin village where he spent time reading by candlelight -- at least that's what the guides used to say to the school groups who took field trips there.

I also enjoyed seeing his home in Springfield, IL, but that was from his later life and was a much ore formal home.  I think I preferred the log cabins.  There are also stories about his first law practice in Lincoln, IL.  It's been a long time since I've seen it, but in my memory his first law office was also in a log cabin.  If that isn't right, please don't tell me.  I like my memory of a log cabin with a historical marker saying it was Lincoln's first law office.  Memories from childhood are tricky -- sometimes a lot of it is imagination and I had a GREAT imagination as a child.  Hopefully, I still do, it's more fun that reality sometimes.

I've made several log cabin quilts.  This month, I plan to show some of them to you.  Two of them are still in the quilt top stage, but that's okay.  They WILL be quilts eventually.

For Christmas 2006 I made a blue and yellow log cabin quilt for Gary's mother who passed away this past December.  That is why the quilt is back in my possession.  I made the quilt as a lap quilt as her legs and feet were always cold.  She told me she slept under it.  It's a small quilt (49" x 49"), but she was a tiny woman having shrunk from her original five foot four inches to probably less than five feet.  Still, I wish I'd made the quilt bigger so it would have covered her better, but then, it was made to be a lap quilt not a bed quilt.

It's bright and cheery.  I like it a lot.  I'm very glad that she enjoyed it.  Here is a picture of the quilt I now call Lincoln Logs since she lived in Lincoln, IL while growing up and she had moved back to Lincoln a few years after Gary's Dad passed away and she spent that last years of her life in Lincoln. 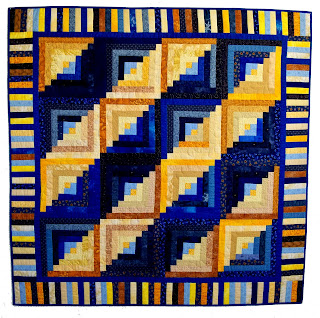 Lincoln Logs is set in what is called a straight furrow setting for log cabin quilts.  As Gary's parents farmed for many years, it seemed to be a fitting set for the blocks.  I have done 3 quilts in this setting.  One was for my dad on his 90th birthday and the other was made from the "overs" blocks that I made while making Dad's quilt.  I'll show those in a later post.

Here is a closeup of the feather quilting that wanders through the yellow part of the blocks.  Have I mentioned that quilting feathers on the machine is one of my favorites?  No?  Well, I do and this probably won't be the last time you hear me say that. 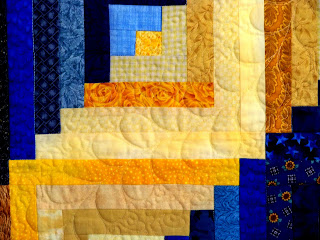 I have a lot of logs already cut for another log cabin quilt.  They were left overs from a scrap log cabin that, unfortunately, the pictures I took are among the lost photos.  It was given to a missionary who stayed a couple of nights with us.  She mentioned that she used to have a log cabin quilt that she loved, but that she had loaned it to another missionary family who apparently thought she had given it to them as they took it with them when they went to another mission field.  She didn't have the "heart" to ask for it back.  The story tugged at my heartstrings so my next quilt was a scrap log cabin to replace the one she "lost".

Tell me about your log cabin quilts or share stories about log cabin quilts you've seen and loved.  I'd love to hear about them.  It's a great way to use up small pieces of left over fabric.  All the log cabin quilts I've made except the very first one were made from 1-1/2" strips.  I have two drawers full of 1-1/2" strips pus a couple of other containers with either strips or logs already cut waiting to be sewn into the next log cabin.

Itchin' to Stitch,
Lois
Posted by Lois Arnold at 6:08 AM

Your log cabins are pretty. It has never been a favorite block of mine to sew though I do have several designs I drew adapting the basic log cabin to look like Mexican houses. Used to drive me crazy in Mexico when my friends would make log cabins instead of Mexican inspired quilts. They always wanted to know why we build our homes out of match sticks!

Thank you, Lorinda. One of the first classes I took at a quilt conference was from Flavin Glover who does almost nothing but log cabins. As she is from Auburn, AL I had the opportunity to visit with her a few times while we lived in Montgomery. She was an inspiring, friendly teacher and does a lot of interesting things with logs. My quilts are just traditional logs. The 1st one was made from templates in 1976! I didn't make another until my Dad's 90th birthday and I wanted to give him a "farm themed" quilt. I think I may have pieced the court house steps one earlier, but never put the border on until recently. I would love to see your Mexican inspired log cabin drawings - sounds intriguing.

My second quilt to piece, and first one done, was a log cabin. I took a class and the lady next to me sewed at approx. 100 miles an hour. Drove me to distraction. Then, when the top was done I had some interesting "peaks" at the corners. Thank heavens for the sweet old lady that told me "don't worry, they will quilt out". As I recall, her name was Mae Conzett. Remember her from the first years of guild?

And then there is the log cabin quilt I cut in 2003 that is sitting in the bottom of my cedar chest with the blocks 1/2 completed. The blocks are so wanky that I gave up on them.

Then I have another quilt started using scraps that I am paper piecing with 3/4" logs and not paying attention to light or dark, just sewing the next color that is pulled. It reminds me of a quilt Lorinda got from an aunt that I quilted.

Yeah, guess you would have to say that the log cabin is not my favorite quilt to make. But I do enjoy seeing what everyone else does with them.

Jo, didn't you take the Quilt in a Day log cabin class? I think the problem with those was the size of the logs -- they were soooo wide! They were also only 2 or 3 fabrics as I recall. I remember advising someone who was taking that class at the quilt shop where I worked to cut the logs narrower and to use a variety of light & dark fabrics. I'm going to show my first log cabin in a later post and it is 70's ugly. At least it is a variety of fabrics, but not so attractive. Log cabins to me are just cozy as even non-quilters seem familiar with them. I bed you could do a wonderful job piecing one now - we have all come a long way from that first time we all met years ago!