When I'm waiting for something I have trouble with that!  Maybe that's why I like clock faces right now.  I showed you a bunch here and not then there was my Time is Ticking pillow.  Clock faces just kept cropping up, so I decided I needed to make one -- a big one, so I made this: 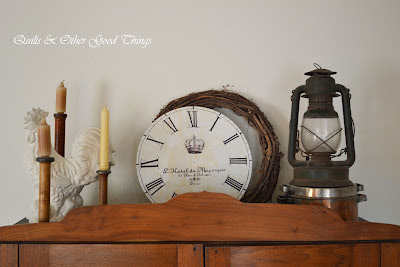 The face is sort of hidden on the armoire.  I've been thinking of painting the armoire and putting crown molding on it.  That is probably what was there to begin with.  My dad had my brother-in-law cut a piece of walnut for the front, but I'm pretty sure it should have been crown molding instead to be more authentic. 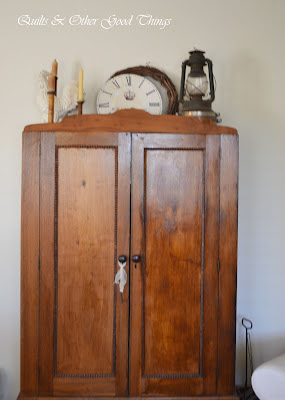 The clock face began as this hex sign I bought in Pennsylvania many years ago. 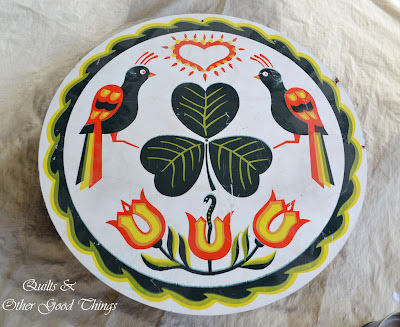 This sign hung on a cute little storage building where we lived at the time. I'm not in love with it and never really did like the colors, but wanted a remembrance of our time in Pennsylvania Dutch country. 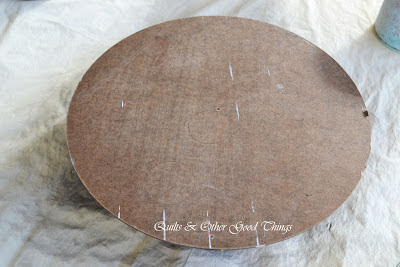 The back looked like this.  Can you see the flaws along the edge?  Perfect for the look I wanted! 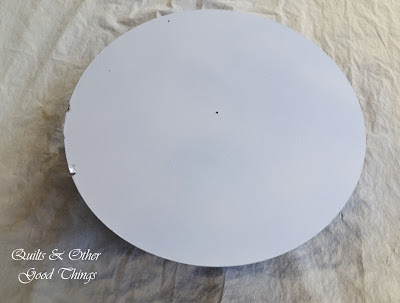 A couple of coats of primer and a couple of sandings were needed. There was a lot of waiting for the paint to dry between coats! 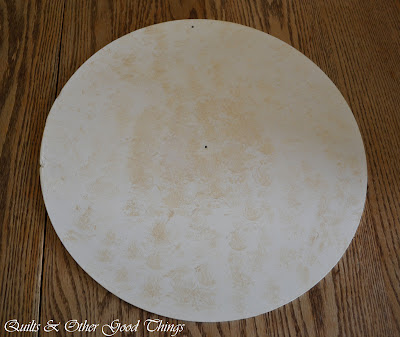 A couple of coats of white paint and then I used a paper towel to dab some cream colored paint to give that aged look to the face without having to use antiquing gel. 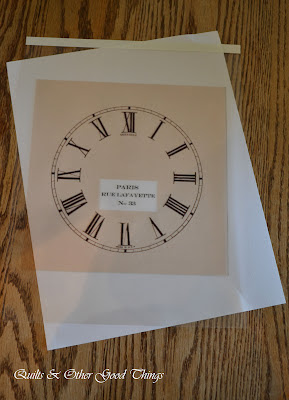 I used a graphic from The Graphics Fairy (my favorite go to place for graphics!) An overhead projector was used to enlarge the design.  I used a fine mechanical pencil to draw on the numbers.  I ended up using different words that I had originally planned.  Those I enlarged on the computer and then traced using graphite paper behind.  You can also use a pencil and color the back of the sheet you have printed the words on, but that is much messier, I think.  After the letters and numbers were on the clock face, I used black extra fine and fine Sharpie pens to fill in the spaces and add the minute marks.  This was a VERY time consuming task.  The Sharpie pens did not like to stick to the paint which I've never had a problem with before.  Paint pens might have worked better, but I didn't have any on hand. 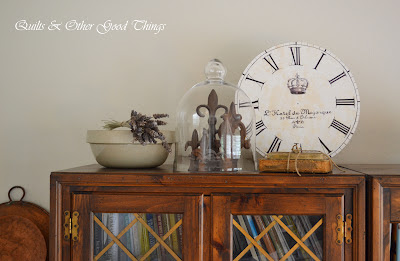 The crown was another graphic from The Graphics Fairy, but it was a little trickier to apply.  Since I wanted it to look antique, I didn't want to use the same Sharpie pens used for the numbers and lettering.  On the Graphics Fairy, I found a link to a tutorial for using Modge Podge and Elmer's glue to transfer an ink jet image onto the painted surface.  This was the first time I had done that so it was scary waiting overnight to see the results!  Next time I think I'll use a thicker coating of Elmer's, but overall, it has the look I wanted -- time worn. 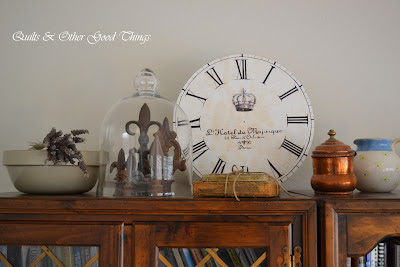 Do you like it better on the armoire or the book cases?  It will probably be moved over a bit and maybe a basket or something added to the right of the clock to balance the entire space better.  Since I was trying for a closer look at the clock face, you can't see the rest of the top of the right bookcase. 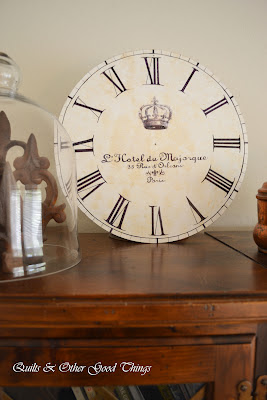 Here is a little closer look with the books moved so you can see the entire clock face.

Times flying and I really must say it's been fun! Spending time with you, my friends is always fun!  Hope you have a grand day!

I love the clock you made. It looks great with your vignette on the bookcase.
I'm a new follower and hope you'll stop by, Mary Alice

Mary Alice, thank you for your sweet comment. The clock is staying on the bookcase for now. Loved my visit to your blog and became a follower -- tres chic!

Love your clock face! What a great idea to reuse what you already had! Now I want to make one, too:)

this is sweet! i love clocks...there's something so 'timeless' about them!


It's nice to meet and follow you Lois...I came from your link on Vintage Inspiration....hope you'll drop by and have a peek at my bathroom makeover.